Critical habitations is excited to announce its upcoming collaboration wit the ICI Berlin. Save the date and join us!

Criticalhabitations is happy to draw your attention to the research project Minor Migrations: Reframing the Discourse around Refugee and Asylum-Seeking Children

From the Children Overboard scandal in Australia, to the global response to the image of Aylan Kurdi’s body, to the policy of family separation at the U.S. / Mexico border, contemporary debates about migration often play out around and on children’s bodies and through ideologies of childhood. Such debates highlight the power of children to mobilise moral sentiments in a context that is largely hostile to the arrival of disenfranchised non-white bodies. Yet whilst narratives and images of vulnerable displaced children elicit strong emotions, their framing often reinforces normative ideals of children and childhood, which in turn detracts from the material realities of child displacement. Such idealized representations seldom offer adequate vehicles for ensuring children’s rights or creating ethical and humane migration regimes more generally.

The interest of various actors – politicians, humanitarians, activists, journalists, migrants themselves – in framing discussion of human mobility around child migrants builds on a long tradition of using images and narratives of children for specific national projects. Central to this tradition is the equation of children with the “universal” ideas of childhood-as-potential, innocence, goodness, vulnerability and helplessness that work as powerful vehicles of community and consensus building. As embodiments of our future, Sharon Stephens (1995) argues, “good” children have been seen as “at risk,” their protection contingent on their role within projects of nation building. At the same time, she claims, “bad” children are seen “as risks,” or threats to “our” sense of community and identity, deserving not rescue but disciplinary interventions. Such simultaneity of images of threatened and threatening, deserving and undeserving children, writes Bhabha (2014), testifies to the ambivalence concerning displaced children in the West.

In the context of migration, these archetypes contribute to ambivalent perceptions and configurations of children who migrate alone as, for example, victims or as threats to national security. And whilst they ensure visibility, humanitarian frameworks that frame children as “at risk” and rely on patrons and experts to plead their cause provide actual children with few opportunities for expressing their own opinions as agents of migration in their own right (Bhabha 2014). Resulting conceptions of the child migrant – and specifically the child refugee, as we seek to show – thus tend to reflect at an extreme the practices of silencing, dehistoricization and depoliticization that Liisa Malkki (1996) identified in Western discourses about refugee populations more broadly.

Recently, overlapping fields of study have come ever more strongly to problematize pervailing discursive practices around both childhood and forced migration. From the side of childhood studies, childhood has emerged as a site of contested social and cultural meanings and political agendas (James and James 2004). With the turn to the “politics of childhood,” the concepts of innocence, vulnerability, lack of agency, and dependency are associated with normative visions of childhood, mobilised in the pursuit of political and ideological agendas (Stephens 1995). Furthermore, a growing body of work critiques the equation of childhood with innocence (Stockton 2009; Faulkner 2011; Ticktin 2016), highlighting how normative ideas about childhood discipline and/or exclude “unchildlike” children (Aitkin 2001; Brown 2011). From migration studies, the “autonomy of migration approach” (see Nyers 2015) draws attention away from modes of state control and expert knowledge to forms of migrant agency, putting the actions and aspirations of migrants themselves at the centre of investigation, including those of children. Similarly, critical refugee studies have re-centred refugee storytelling and communities as vital sources of knowledge and agency while insisting on the importance of reconstructing imperial histories behind roots and routes of dislocation (Espiritu 2006).

In this project on ‘minor migrations’, our “child-centered approach” examines the conjunction of politics, history and migrant children in different national and transnational contexts. We chart the heightened visibility of displaced children and explore how the figure of the migrant child becomes a carrier of political meanings, configuring political debates both within and beyond national spaces. Drawing on the fields of postcolonial and cultural studies, childhood and forced migration studies, we aim to bring new perspectives to the contemporary discussion on child migration. With its attentiveness to power dynamics, our interdisciplinary framework highlights the kinds of imperial histories and practices that undergird child/related politics and policies of migration. Simultaneously we are concerned with creating “spaces of enunciation” (Woolley 2017), in which children’s voices become audible. Focusing on refugees and asylum-seekers, but also on illegalized minors crossing borders for economic reasons, we explore intersections between the politics of age and the politics of movement, between child-protection regimes and national economies, between humanitarian sentiments and human rights, between the politics of childhood and the politics of asylum. 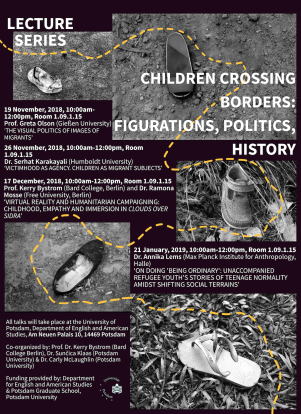 “Minor Migrations” is a collaboration between Bard College Berlin and the Department for English and American Studies at the University of Potsdam. Developed by Prof. Kerry Bystrom, Dr. Sunčica Klaas and Dr. Carly McLaughlin, the project brings together international scholars and activists working in the field of child migration.

The project spans a variety of initiatives, such as the international symposium “Shifting Frames: Migrant Children, Politics and History” and the lecture series “Children Crossing Borders.” We are very grateful to the Thyssen Foundation, Bard College and the University of Potsdam for their generous support of the project’s activities. For further information see https://www.uni-potsdam.de/iaa/ and https://berlin.bard.edu.

Faulkner, Joanne. The Importance of Being Innocent: Why We Worry About Children. Cambridge: Cambridge University Press, 2011.

Want to contribute to criticalhabitations? Here is how!

The role of German actors in European colonialisms, especially before the foundation of the German nation state in 1871 and Germany’s entry into imperialism proper with the so-called protectorates of 1884/85, is a contested one. Different academic camps have interpreted the peculiar German case very differently. Opposing positions were flagged in the late 1990s and still hold. Notably, the literary scholar Susanne Zantop (1997) compellingly argued that longer standing German ‘colonial fantasies’ were not only instrumental in paving the way for later German imperialism but analogous to Hannah Arendt’s earlier argument that they were also constitutive for Germany’s fascist futures in the twentieth century. Although the continuity argument about the links between the Holocaust and antecedent genocidal practices during the Herero uprising in South West Africa (from Waterberg to Auschwitz, so to speak), and the implications of making the link have been debated, subsequent historians, including George Steinmetz (2007), have shown how colonial fantasies were indeed operative, although they met with other determining factors, such as local conditions and the habitus of German colonial actors, when they were put into practice in the German colonies.  By contrast, critics like Russell Berman (1998), partly drawing on Edward Said and Mary Louise Pratt, but also deliberately distancing himself from universalising arguments about the European colonial project, proposed that early German investment in other states’ colonialism could be, and very often was, a disinterested affair driven by a passion for science and the extension of knowledge rather than conquest. END_OF_DOCUMENT_TOKEN_TO_BE_REPLACED 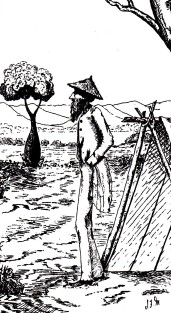 The explorer Ludwig Leichhardt (*1813 in Trebatsch – †1848? in Central Australia) is a colonial figure shared by Germany and Australia alike. After a successful expedition together with a party of Indigenous and non-Indigenous men, travelling north – east from Moreton Bay (Brisbane) to Port Essington in 1844 and 1845 –  Leichhardt was hailed as hero in both his native Prussia and in the Australian colonies. His and his party’s subsequent disappearance in the Australian interior on a further expedition in 1848 bound for the west coast remains a mystery, and together with his controversial character and the mixed nature of his legacies, continues to fascinate, engage or trouble Australians, Germans and others.

Today Leichhardt is remembered as a scientific hero, a cultural enquirer, and as an agent of colonial expansion. He has been portrayed through fiction and visual art, sung about, and cudgelled by opinion. He has been claimed or vilified by the Australian colonies, the British Empire and Prussia, by National Socialism and the East German state, as well as by contemporary Germany and Australia. Still missing, he is found in so many places.

In the light of important contemporary reassessments of Germany’s colonial past, how can cultural studies adequately engage with such a legacy? Given how little we can ever know about Leichhardt’s fate, what is the potential, in this context, of a fragmented yet composite picture of the explorer? A little over 200 years after his birth and exactly 170 years after departing on the journey from which he never returned, researchers, cultural producers and family members within and beyond the Academy were asked to experiment with the memory of this ambiguous colonial actor. They were invited to share a Leichhardt yarn and to contribute to the ongoing renegotiations of meaning attached to him as a dynamic figure enmeshed in the forces of memory.

In ‘Failure: The Curse of Leichhardt’, Anna Haebich introduces the reader to the Australian politician Bill Grayden, who set out on an expedition to find Leichhardt and returned as a modern-day prophet with a new cause: to “help” the Ngaanyatjarra desert people.

Lindsay Barret describes a traumatic experience he had, living in the inner-Sydney suburb of Leichhardt. He explains how the suburb was named after Leichhardt and how he and Leichhardt actually share a few things in common, especially the urge to record, observe and make traces.

In ‘Schoolbook Leichhardts: Discovering Ludwig Leichhardt in Historical Narratives for Children‘, Stefanie Land-Hilbert reflects on her discoveries on Leichhardt in Australian and German textbooks.

Anja Schwarz reflects on a puzzling comment by Irrwanyere elder Bingey Lowe in ‘Too many Ludwig Leichhardts‘.

These and many other Leichhardt stories can be accessed here. 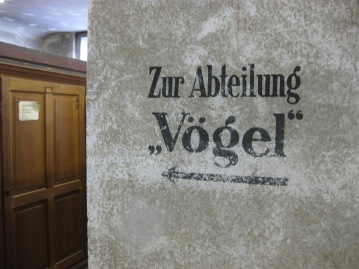 Recent years have seen a growing interest among museum practitioners, as well as the greater German public, in the history of objects acquired in colonial contexts. This turn to colonial objects forms part of a broader shift in the status accorded to colonialism in Germany’s memory culture. Long neglected or wilfully ignored, Germany has for a long time been reluctant to accept the responsibilities arising from the nation’s colonial past.

Objects and specimens collected in the colonial era have a particular role to play in this process, as demonstrated, for instance, by the heated discussions around the current reassessment and relocation of some of Berlin’s ethnological and ethnographic collections, which are to be housed, as of 2019, in the Humboldt Forum in Mitte. In this context, questions are being asked about the legal context of the objects’ acquisition and their adequate management by museum staff and researchers. How are such items to be cared for and stored? How, if at all, should they be made accessible to the public, and possibly displayed? Should they be returned? And there is a slowly growing understanding of the kind of complicated ongoing connections and obligations that these objects might establish between European collecting institutions and Indigenous communities today.

It might seem slightly eccentric to raise the issue of natural history collections within the context of these debates about the legacy of German colonialism and the attendant politics of collection, display and repatriation. Nevertheless, I want to situate natural history objects within such a framework for two reasons that foreground the entanglements of humans and non-human objects in our social histories. END_OF_DOCUMENT_TOKEN_TO_BE_REPLACED

What kind of knowledge do we have to define in order to initiate a decolonial university? In her contribution to the “Pluralising Practices” debate, Katrin Köppert takes this question as a starting point to discuss the project “DE_colonize Uni_VERSITY”.